The best list of Quotes of the Year is not a list of political quotes, sports quotes or business quotes. But more about that in a moment.

For the most notable quotes of the year, many sources cite Yale Law School librarian Fred Shapiro's annual list, published here at the Huffington Post for example. This year the tie for first place went to Christine O'Donnell ("I'm not a witch.") and Tony Hayward, former CEO of BP ("I'd like my life back."). I personally favor Hayward's as a more poignant reflection of our times. Neither of them is worthy of a place on your wall, however, and so you will not see these at QuotePalettes.com any time soon. You're welcome.

The website AllGreatQuotes.com publishes Quotes of the Week and the 2010 collection is posted here. This is a pretty entertaining and comprehensive list.

ESPN has a list of the top 100 sports quotes. See the top 20 here. I'm not a huge sports fan, so these lists tend to sound the same to me year after year.

At this tech blog, there's a unique list of IT related quotes of the year.

I suppose the quality of a quote list like beauty is in the eye of the beholder. The best collection of 2010 top quotes for me is this list compiled by blogger Carolyn Robertson at the Momformation blog (babycenter.com/celebrities). If you're a parent, you'll enjoy this glimpse at the mom and dad side of Matt Damon, P. Diddy, Halle Berry, Michael J. Fox and others.

Quotes are simply words spoken or written by others that hold special meaning to you. The most meaningful quote of the year for you may be something said by your child, your spouse or partner, your boss or your friend. Share them with us here.

The quote of the year for me came from a friend I'll call Robin who had been seeking to adopt a baby (as a single mother) for over a year. Finally, earlier this year, Robin was matched with a pregnant woman in a distant state. Robin followed the progress of the pregnancy closely, visited the woman several times, paid for doctor visits, lawyers and food. Then, two weeks before the baby was born, the expectant mother called Robin to say she had second thoughts and would not be going through with the adoption. Robin was crushed. She wanted so much to be a mom, but if her fate was otherwise, she'd accept it. The process had taken its toll, and she decided she would not try again if the adoption fell through. About 3 weeks later, I received an email on my blackberry on the way home. It was from Robin. The baby was born, and it was Robin's. Her message, and the best quote of 2010:

"I would like to introduce you to Evan Noel [Doe]. He was born on Friday October 8, 2010 at 2:20pm. He had some breathing issues but getting better by the day. I look forward to bringing him back to NY next week. Love Robin"

Wishing everyone a year of happy new quotes -

Gary @ Quote Palettes
No comments: Links to this post 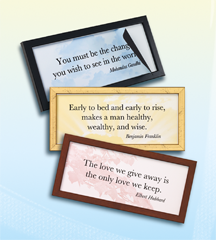